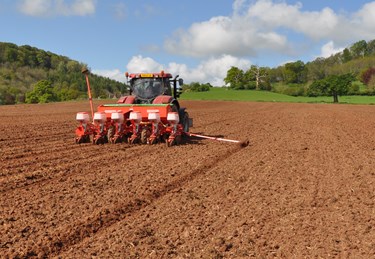 Most maize-growing farms will employ contractors to drill and harvest the crop. But when maize was added into the rotation at Wistaston Farm, in Herefordshire, farm manager Steve Klenk wanted full control of the drilling operation. He bought a second-hand Gaspardo precision drill to start with, and then last year traded it in for a new 6-row Gaspardo MTE to sow the required 400 acres (162 ha) of maize.

Wistaston Farm is an in-hand farm of Garnstone Estate in Kings Pyon, Herefordshire. Here, farm manager Steve Klenk has been improving the soil health and structure on the arable farm with a strategy that encompasses min-tilling and direct drilling, winter cover-cropping and the spreading of animal manures.

Five years ago, Garnstone Estate took a share in the set up and running of an AD plant which now supplies both heat and electricity to a factory. The feedstock was to be maize silage. So, for the first time, maize was added into the cereal crop rotation at Wistaston Farm. 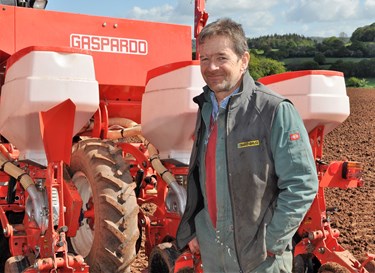 Most of the ground is a silty clay loam; the fields selected for growing maize are those with lighter soils.

Maize will follow wheat in the rotation. But first, after the wheat harvest a cover crop mixture is established. This ‘forever green’ approach confers a number of benefits, Steve explains: “It helps prevent soil erosion and soil slumping, and the presence of a root system maintains a good soil structure. The cover crop will also mop up any leftover nutrients from the previous crop, and mine nutrients from the soil.”

With an eye on keeping costs as low as possible, Steve buys in seed as straights and then makes up the mixtures on-farm, and these are sown using a fertilizer spinner. The autumn-sown cover crops may contain up to 12 plant species, and typically include oats, phacelia, peas, Crimson clover, clover and linseed.

In early spring, the cover crops are spread with 2t/ha of chicken muck, followed by 20t/ha of a combination of cattle muck and liquid and solid digestates from the AD plant. The cover crops and manures are then disced into the soil.

Steve explains: “Then we’ll run through the cover crop with a low-disturbance subsoiler, followed by a HE-VA disc roller to create a seedbed into which the maize will be drilled.

“Because the ground has not been overly cultivated, there’s no slumping.”

Typically, five varieties of maize are grown each year, sourced from several suppliers. Some are ‘bankers’ – that have been grown successfully before on the farm, and then every year some new ones are tried. All varieties need to be early or ultra-early maturing, so they can be harvested in September, in time for winter wheat to be sown. 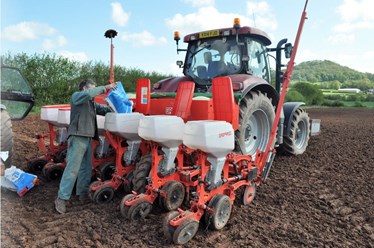 Most maize drilling on farms is carried out by contractors, rather than farmers having their own drills. But Steve wanted to keep the drilling in-house, even though the initial maize acreage was not large. He explains: “I wanted to have control and have the convenience of being able to grab the weather window and drill when I wanted, rather than having to wait for a contractor.

“On our minimal tillage systems, and heavy soils, I knew the seedbeds were never going to be perfect. So we needed a disc drill.”

To start with, a second-hand Gaspardo precision drill was purchased for the job. “With the Gaspardo drill design, the seed sits in a perfect seedbed; it might be a bit cloddy either side of it, but I’m not too worried about that,” adds Steve.

Having been pleased with the design and performance of the old drill, Steve approached his local dealer L.Evans and Son for a new 6-row Gaspardo MTE drill with an MTR planting unit.

“We effectively replaced the old drill ‘like for like’ but there were improvements in the new model and I’ve noticed some differences. For instance, there’s slightly better row spacing.

“Also, the parallelogram linkage is a heavier unit and has more strength – so it is better at dampening any coulter bounce, which gives more even depth of establishment, and we can go a bit faster if needed.

“It’s an easy drill to use – adjusting the seed rate and fertilizer rate is simple.” A seed rate of 110,000 seeds/ha is used with 125kg/ha of DAP put down the spout at drilling.

Steve prefers to drill at 8km/hr, although he says he could go faster: “At this speed, I’m still covering 2ha/hour and using 4 litres of diesel per ha. So it’s not an expensive operation.”

Contractors are called in for the harvesting operation. Last autumn, harvesting started at the beginning of October and fields were cut in several different lots over a 3-week period.

“We averaged a yield of 46t/ha,” says Steve. “And I’m very pleased with that. There wasn’t a vast difference between the five varieties grown, but there were differences in yield between some fields.”

In a normal autumn, once maize is harvested, shallow cultivation follows using the disc roller and then wheat is drilled into that. But last autumn, like on many farms, wet weather has meant most fields have had to be left unsown.

Steve explains: “We only managed to drill 80 acres of winter wheat. We have some spring wheat to sow, and in any remaining fields, we’ll just put a cover crop in, or leave them fallow.