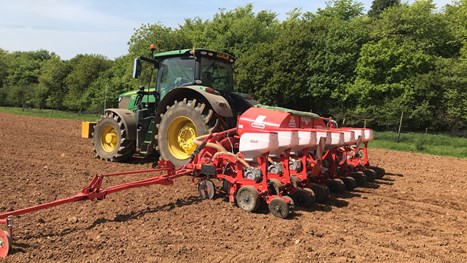 Purchased last year, a Gaspardo Mirka maize drill has broadened the opportunities for one Cornish contractor and has coped well with difficult stony conditions. It’s also brought the added satisfaction of seeing the crop right through from sowing to harvest.

Despite having run a silage round with a decent lump of maize harvesting at its core for the last two decades, until last year north Cornish contractor Mark Andrew (director, Mark Andrew Ltd) didn’t get involved in drilling.

But with an increasing acreage of his own maize last spring he decided to add a precision drill to his ever expanding machinery fleet.

“The fodder supply side of our business has grown over recent years to the point where we’re now growing some 500acres of our own maize,” explains Mr Andrew.

“Where previously we used a sub-contractor to get crops in the ground, as the acreage grew it began to make sense to look at having our own drill.

“We’ve got several guys on the team who have experience of running precision drills and with the fodder beet they like the whole process of taking the crop right through from sowing to harvest.

“It’s the same story with the maize. As an industry it’s so important to make the most of staff skills and enthusiasm – they take real pride in getting crops in the ground and following them right through the growing season.”

Having made the decision to get into the drilling game it was then a case of deciding which machine to go with.

“Our main drill-man had experience of running a Gaspardo maize drill and really liked how easy it was to set-up and run. He was keen to go down that route but I wanted to take a thorough look at the other options.

“However having done my research and gone round the competition we came back to the Italian drill. As an ex-mechanic myself, I particularly liked the build quality and the mechanical simplicity of the Gaspardo.

“It doesn’t get much more straightforward than having shaft drives to each metering unit and just two inter-changeable sprockets to alter rates. Simple and robust, the driveline looked like it would last the test of time.”

Running an 8-row maize header on his forager Mr Andrew wanted a drill the same width to make for easy harvesting so he settled on a linkage-mounted Gaspardo Mirka MTR. 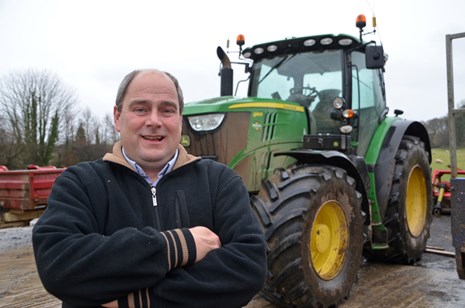 “It certainly wasn’t the cheapest option but we had faith in the Gaspardo, our previous contractor having run two of them with very few issues. The seeding depth and spacing was 100% reliable.

“The one thing I really liked about the Mirka was having the fertiliser hopper mounted on the toolbar rather than using a front tank. We’d found in the past that blowing it front-to-back could end up with uneven application across the rows. There’s no issue with that now with the hopper kept close to the seeder units.”

So last season the 8-row Mirka MTR made its debut and immediately impressed, its double disc openers capable of maintaining even seed placement in varying seedbed conditions.

“Being big diameter, the twin discs cut down through to the right depth even in hard-packed soils. It’s a narrow slot they cut so the twin press wheels don’t have any trouble closing it over.

“The other thing that helps in maintaining a uniform depth are the clod clearer blades running ahead of the discs. In our stony conditions that means their path is kept clear and the coulters aren’t inclined to ride up and over lumps and rocks.

“Its reliability gave us the confidence to do a bit of a trial later on last season running into ploughed ground that had just been worked down with a simple tine harrow alongside some that had been power-harrowed in the normal way. You couldn’t see any difference in crop emergence and when it came to harvest it was all exactly the same.”

While doing a decent job is important, covering the ground at a reasonable rate is equally essential in that tight spring drilling window when conditions come right and soil temperatures begin to climb.

“When we initially looked at the drill I liked the way it folded with the seeder units stacking on top of each other in line behind the tractor. It’s a quick process that makes field changes easy.

“Being a mounted machine with the integrated hopper, when it’s fully loaded it’s a heavy rig and tractor certainly needs a weight on the nose. But it’s a much more agile arrangement than separate a separate front tank and rear toolbar.”

Mark Andrew plus another 15-20 full-timers

This article first appeared in