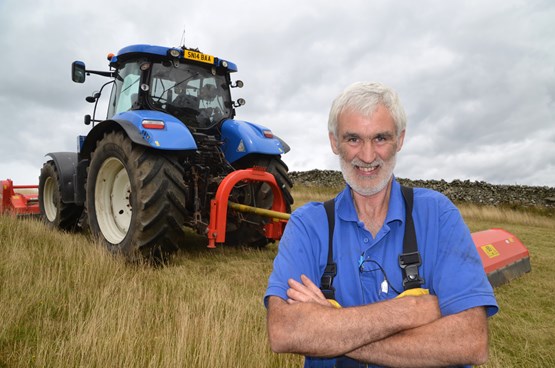 It takes a brave soul to go flail topping in the Scottish borders, one of the rockiest places in the British Isles.

But for contractor Jim Rodger it’s his bread and butter, clearing rough heather and gorse moorland as well as keeping pastureland in good order through the summer months.

Much of the ground is buttock-clenchingly steep and nearly all of it dotted with stones and small boulders – not ideal conditions for the faint-hearted driver.

“Mulching the woody growth on the hillsides is essential in keeping the grazing open and many of the sites that I work on are in environmental schemes that stipulate they must be topped,” explains Mr Rodger.

“But of course you can’t choose the terrain. At best it’s undulating and very often every turn involves cocking a rear wheel in the air so you’ve got to have your wits about you. But it’s the machinery that really suffers – because there’s so much rock about the mowers get absolutely battered.”

Previously he ran a single front-mounted 3m flail mower but it couldn’t handle the harsh diet it was expected to consume, constantly breaking blades and knocking the shaft out of balance. Also being over 3m on the front of the tractor the old flail topper was ungainly on the road and when lifted to turn could be unstable on the banks. So last year he set out to find a better solution.

“I needed a more robust machine and with my workload growing year-on-year wanted to be able to get over the ground quicker. I already had plenty of power as I need a 200hp tractor to stay planted on the slopes – a front and rear combination made sense.

“I did a fair bit of research but the only machines that really seemed up to the job were Maschio flails. Everything on them is heavily built from the 6in wide blades to the massive rear rollers. They weren’t the cheapest option but I could immediately see they’d be up to the job so I put my name down for a front-mounted 2.8m Bufalo and a 2.6m rear offset Giraffona.”

The combination arrived in early 2018 and was immediately put to work clearing woody heather on undulating moorland ahead of the nesting season for grouse and other ground-nesting birds.

“Straightaway the difference was apparent, the flails travelled so much better over lumps and bumps thanks to the big rear rollers.

“And having the rear machine being able to cut at any angle from a vertical hedge bottom to an angled ditch bank is brilliant.”

“But they’re also doing a better job of mulching – the double rows of counter blades smashing even the ropiest vegetation down to nothing.”

Although the harshest work for the flail mowers is up in the hills, they do get a varied workload.

“With greening rules coming in I’m now often drafted into deal with cover and catch crops such as radish and phacelia. Drilled straight after winter barley harvest into stubbles plastered with pig muck, they’ll often grow to the height of the cab door handles in just a couple of months.

“But that doesn’t seem to make a difference to the job the Maschio toppers do. Even with such a big bulk of material to deal with, they mulch it fantastically well, leaving an even mat of material that’s easy to cultivate in for the following crop.”

Although the working width of the outfit is effectively double that of the previous machine, outputs have almost tripled, rising from around 1ha/hour before to closer 3ha/hour now. That’s particularly important as it has meant Mr Rodgers is able to handle his increasing workload singlehandedly. 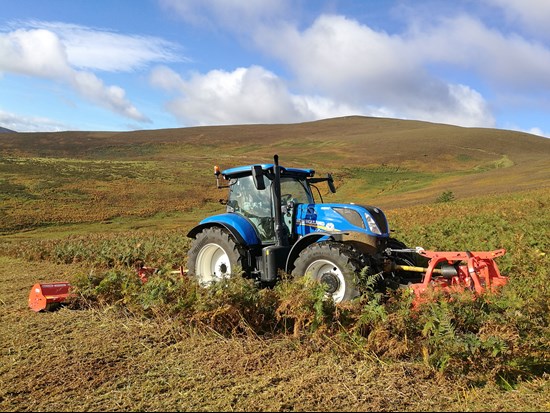 “The acreage of moorland and rough grazing management is growing so fast that I had to do something to increase output. The Maschio combination has certainly achieved that – I’m now able to clear almost 900acres in the same time it took me to do 300acres previously.”

The increase in workrate is partly down to speedier headland turns thanks to improved stability on side slopes and partly due to GPS steering, helping to ensure every inch of the machines’ working width is used without overlaps or misses.

As for build quality, after a season’s work the mowers have more than lived up to expectations.

“Unlike the old machine, when a blade hits a big stubborn boulder it just chips rather than breaking off and doesn’t put the shaft out of balance.

“On top of that the body of the machines don’t suffer from the unhealthy diet. The double-skinned hoods are made out of big, thick steel plate that doesn’t even dent.”

Obviously this bodes well for longevity but there are other factors that give Mr Rodger confidence that the Maschio mowers will put in a decent stint.

“The other excellent feature is that both machines have adjustable double-race roller bearings which should be easy to tweak up as they begin to wear rather than having to replace the whole unit.

“But of course the big factor in the new mowers lasting a good ten years is the fact that by running them in a pair they’re actually doing half the work so should last double the time. I wouldn’t have the confidence in any other make being able to do that.”