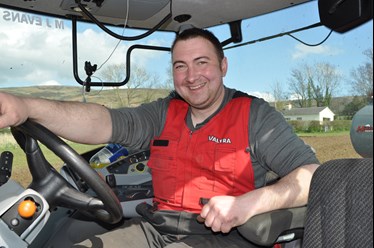 At Berth Farm, near Denbigh in North Wales, Matty Evans farms in partnership with his father Ronnie; they run a flock of 400 Welsh Mountain ewes and a 40-cow suckler herd of pedigree Herefords and cross-breds.

Back in 2005, Matty’s love of machines saw him starting up his own business outside of the farm - MJ Evans Contracting. He began with hedge-cutting and round-baling, and has since expanded the services to include cultivations, corn-drilling, fertiliser-spreading, muck spreading. Grassland reseeding is also a key element of the business, with the majority of work carried out from August onwards.

He currently employs one full-time person – Gethin (Donk) Williams – with part-time labour at key times, and including Ronnie.

Matty explains: ““Most of my customers will be sowing new leys after old. So the normal practice is to burn off the old ley, plough, power harrow twice, roll to create a fine firm seedbed, and then sow the grass seed.  After which the ground will need rolling again.

“To begin with, we used a Vikon ‘wagtail’ spinner to spread the seed and would then scratch it in with a tine harrow. But three years ago, I invested in an OPICO Grassmaster harrow with a Hatzenbichler seeder. This gave us the ability to sow at lower seed rates, and the roller can be changed to cope with small seeds too.

“But there are some fields where we can’t plough – either because they are too steep, too stony or the soil is too shallow.

“Our own farm is one example. Fields on the top are steep with very little soil depth. We can’t really plough it and we don’t want to, because then we’d need to go stone-picking! So it had not been reseeded for some time: we can’t fatten lambs on some of these old leys and need to buy in creep. 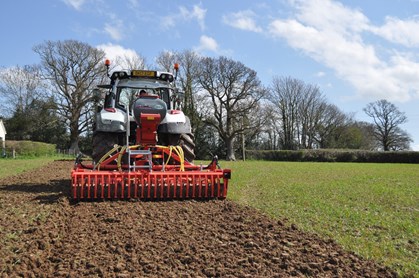 The farm’s agronomist Merfyn Parry of County Crops/Procam is also a personal friend of Matty’s. He saw there was an opportunity for more reseeding work for Matty using a rotavator fitted with spikes to create a tilth and cope with the stony ground, plus a seeder.

This would negate the need to plough and power-harrow and be a one-pass reseeding system. And it would be cheaper: the cost of burning off an old ley, buying the seed, rota-spiking could be done for around £100/acre.

Matty explains: “I’d got enough to do already! But Mervyn kept mentioning it! And in fact, there were farmers wanting to reseed ground that couldn’t be ploughed, and I also wanted to improve the grassland on our own farm.

“I’d rather buy something old and try it out first, before buying a brand new machine,” says Matty. “So I bought an old rota-spiker off Ebay for £1000. But when I used this, and then followed with the harrow/seeder – the tines were throwing up too many sods. The two machines don’t mix!”

Last autumn, again encouraged by his agronomist, Matty bought a new Maschio Rota-seeder from machinery dealer Harrison Machinery in Ruthin. His aim was to use this specifically for reseeding on hillsides where the slopes were unsuitable to take a plough, and/or where there was not the soil depth for ploughing, or the ground was stony.

The Rota-seeder has three main parts: a Maschio Rotavator, a choice of three different blades to fit the ground conditions, and a Hatzenbichler air seeder.

The narrow high-hedged roads are a limitation to width, and so Matty opted for a 2.8m wide SC280 Rotavator.

Matty explains: “For us, stones are the big issue and so I opted for Condor ‘blades’ which are actually more like spikes. Their spacing is staggered which prevents stones from being carried around the rotor.”

Matty also elected to step up a grade with the Hatzenbichler seeder. The new seeder is electronically driven off a radar speed sensor. “It’s more complicated but gives very precise seed distribution….once you understand how to calibrate it!”

The Condor spikes will break up the old ley/topsoil and create a tilth of up to 4 inches in depth. After the rotavator, there’s a bar for the seed distribution outlets, each with their own ‘splash plate’ to distribute the seed. These are followed by a packer roller to consolidate the ground, although Matty is advising farmers to still roll the ground afterwards with their own kit.

Matty reckons he and Gethin can cover around 2-3 acres/hour with the Rota-seeder, depending on soil conditions. “We can go twice as fast with the harrow, but the big advantage of the rota-seeder is that it only needs 2 inches of topsoil.” 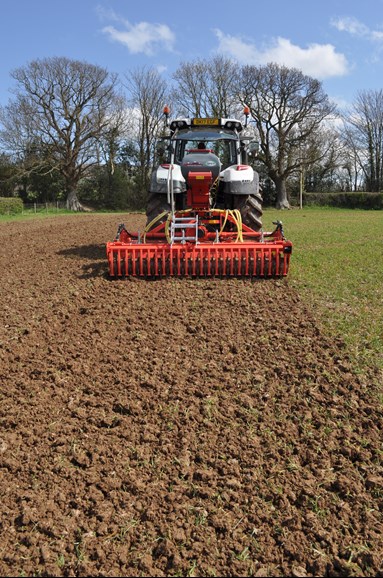 Matty took delivery of the Rota-seeder last autumn and has reseeded 200 acres in all.

“With only one pass needed, it’s not only a cheap reseed but it also means there’s no worry about rain spoiling the ground partway through the cultivation operations.

“We had a rubbish backend last year – so farmers with fields that would normally have been ploughed, asked me to come and reseed in one-pass with the rota-spiker and not the harrow. I hadn’t expected to do so much in the first season, thinking I’d wait until spring to check the results!

“With the Rota-seeder, I can work the 2-4 inches of topsoil quite nicely. It’s very aggressive, and breaks up the soil enough for the seed. I’ve sown grass into maize stubble very successfully.

“And thanks to its low cost, for the first time I’ve sown some stubble turnips into cereals stubble, for new customers.

“On the farm, half of our ‘flat land’ on which spring barley was grown was combined, and then Westerwolds was sown straight into the stubble in September using the Rota-seeder. Lambs were finished off this, then it was left empty over Christmas to green up and then we put the ewes with couples on it. We’ll put it back into cereals in April.”

For Matty, the big benefit of the Rota-seeder is that he only needs to go 2 inches deep. He now has plans to reseed all of the farm’s higher ground, where stones and slopes have always prevented grassland improvement.

Matty believes the best reseeds come from ploughing, working the soil down, sowing with the harrow/seeder and then rolling to consolidate and get the seed-to-soil contact. “But you can’t plough everywhere,” he says.

Tractors and Machinery supplement May 2018