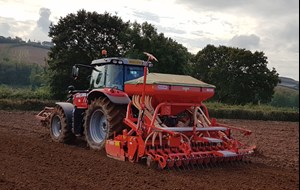 Up until last year the Hockridge family had been running a 10-year old three-metre power harrow combination drill equipped with Suffolk coulters. However, through age and increasingly variable weather patterns, it struggled with consistent seed placement and was prone to wear.

Richard Hockridge says: "On our abrasive red soil the wearing metal on the old drill was costing us serious money. The Suffolk coulters also struggled to maintain an accurate depth, particularly when sowing shallow with OSR or grass."

As such, a rethink of tillage practi­ces was looked at, with the farm aim­ing to move away from traditional practices such as ploughing. This has seen the introduction of an Amazone Cenius tine/disc/press combination cultivator used where possible, while also trailling some direct-drilling with a neighbours' Moore and Claydon drills.

"I am trying to move us towards more of a min-till approach, but with traditional openers that was not an option", says Mr. Hockridge. "Any sign of trash and they would just start to bulldoze. So we started looking at replacement drill options with disc coulters.

At first, it looked like a new drill was going to be out of the question, with prices making changing virtually unvi­able. But then a package deal on a three-­metre Maschio Alitalia power harrow drill caught Mr. Hockridge's eye.

"The Maschio seemed like good value for money-anything else was at least £10,000 more." 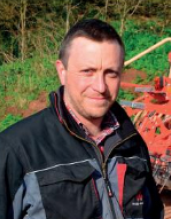 "My initial thought was that you get what you pay for but my dad pointed out that we have a Maschio power harrow in the shed that he bought in the mid-1980s. It is still going strong, often brought out to prepare our maize ground, with nothing required other than new tines every now and then to keep it going. That clinched it. We took the plunge in mid 2019 and the new drill arrived in time to sow our OSR."

Conditions in autumn 2019 were tricky to say the least says Mr. Hockridge, with wet weather continuing right through from the tail end of harvest up to Christmas.

"The Maschio was immediately put to the test with some pretty hor­rible, sticky wet stuff to deal with. With a Suffolk-coultered drill it would have been impossible to get a lot of it in the ground but the Ali­talia's disc-openers just kept turning. It really is impressive the way the coulters cut the slot so that the seed is always covered with a decent layer of tilth by the following harrow."

Though it is season-specific, the new style drill has created a wider working window to get seed into the ground, says Mr. Hockridge. "It is fair to say it will go a lot long­er when it comes wet, and the disc coulters cope a lot better with trash in non-inversion seedbeds."

The electronic metering system also comes in for praise.

"Seed rales are precise with the RDS rare controller. With work rates generated by a GPS feed it knows exactly what pace to run seed out at and that shows as the crops come up. That level of accuracy all hangs on how well it is calibrated of course; a process which has been made easy -you just open the shutter, hit the button, it runs for a given number of turns and you weigh what is given out. Punch time into the control box and it works the rest out for itself.

"However, the electronic metering can be prone to leaving a gap when pulling into bouts. but the con­trol box has a pre-start function which primes metering rollers with seed for a few seconds, doing away with this issue."

Another area where the drill scores well is on the tramlining system which differs quite a bit from its predecessor.

"Rather than counting reps from the marker arms, the electronic control box uses a simple toggle switch to record how many times the drill is dropped in and our of work" adds Mr Hockridge. "That way, if the hopper runs empty halfway up a bout, it does not upset the tramlining - I can just return to the same spot after a refill and continue drilling. Although this is great for simpli­city. it does mean close attention has 10 be paid when lifting in and out of work for a hopper refill. If you are not careful. the system can trigger an early tramline."

In terms of maintenance, Mr. Hock­ridge says: " It is physically easy to get in and around the hopper and metering system to dean it out and I like having greaseable bearings on the packer roller. I also like the quick change for the power harrow tines. Overall, there is not too much to do in the way of servicing."

As for wear rates, Mr. Hockridge adds: "Much of the farm's ground is very abrasive, gritty, red sandstone, so our big issue is always wearing metal. So far we have been surprised that even after 400-plus acres work we have not had to change any power-harrow tines. Coulter discs are also not show­ing any signs of wear - we are hoping that they will not suffer as badly as the old drill's Suffolk coulters. The only metal that has needed changing so far has been the following harrow tines, but we expected that."

Mr. Hockridge says the new drill has been a significant step forward for the farm and adds; "It has greatly widened our drilling window, allowing us to work on far longer when the weather comes in wet. Critically, its ability to handle trashier seedbeds has enabled us to move further towards our goal of reducing the intensity of our cultivations."

This story originally appeared in the March 19th issue of